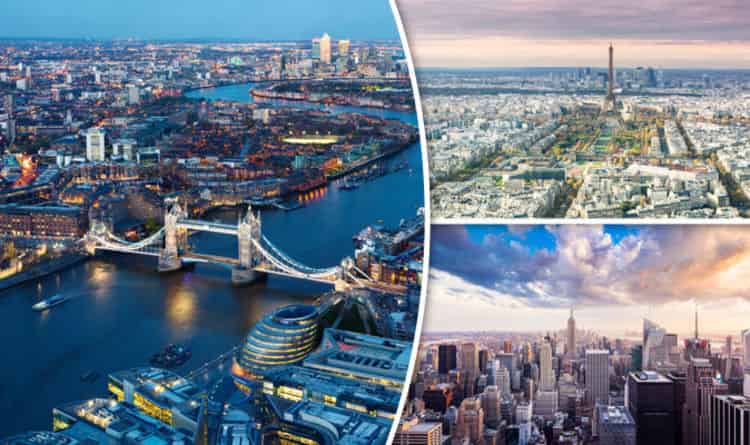 There are many cities around the world that are known for their unique natural beauty and historic buildings. Here are a few examples:

Those looking to escape the hustle and bustle of big cities prefer small towns that stand out for their natural beauty and clean air. Some of the most beautiful cities in the world… 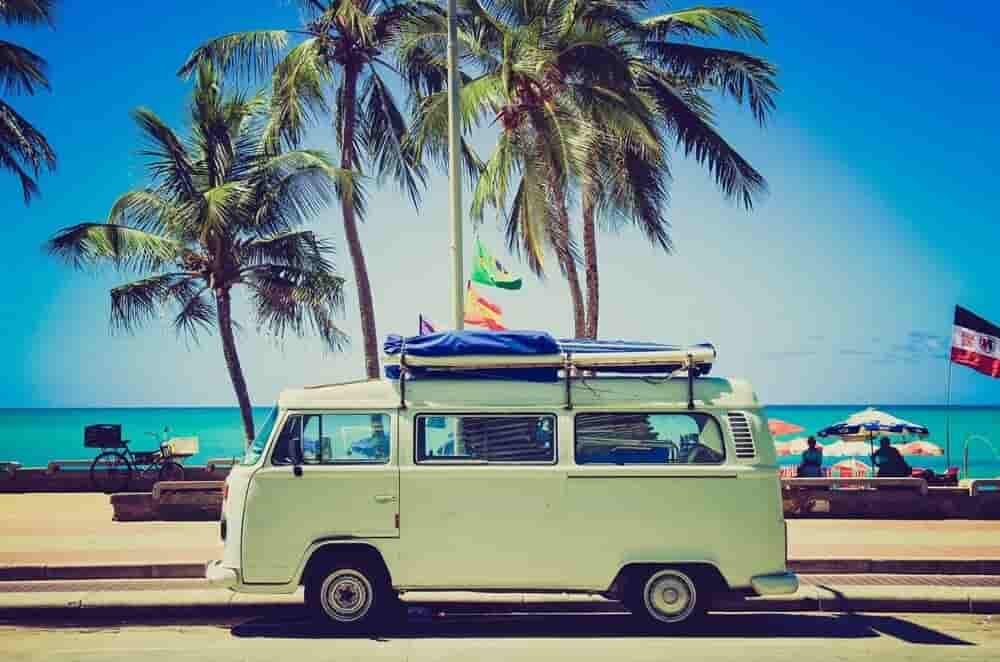 Big cities with their cultural diversity and entertainment have always attracted people who want to visit. However, small towns from all over the world are starting to attract the attention of tourists with their unique nature, historical structures, and local flavors. Some of these towns are not very well known and some get a lot of visitors every period. Are as follows: 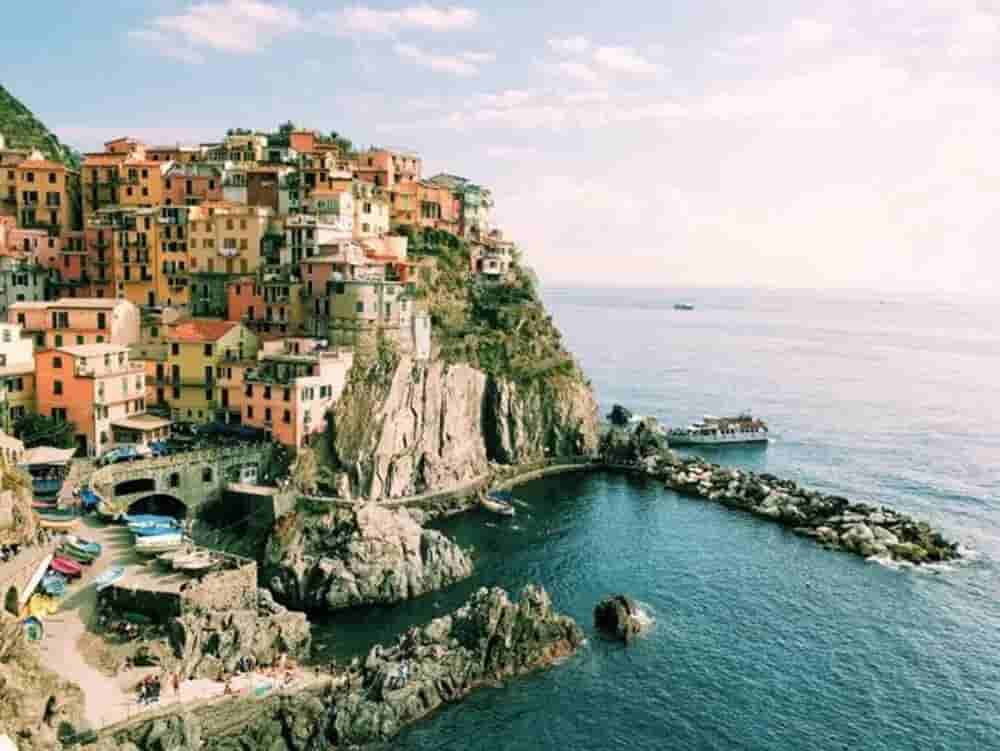 The romantic city of Italy with its rugged coastline… Located between Genoa and La Spezia, the Cinque Terre has iconic significance describing the five village communities. The town, which is also on the UNESCO World Heritage List, consists of a combination of colorful villages. These villages are arranged as follows: Monterosso, Vernazza, Corniglia, Manarola, and Riomaggiore. 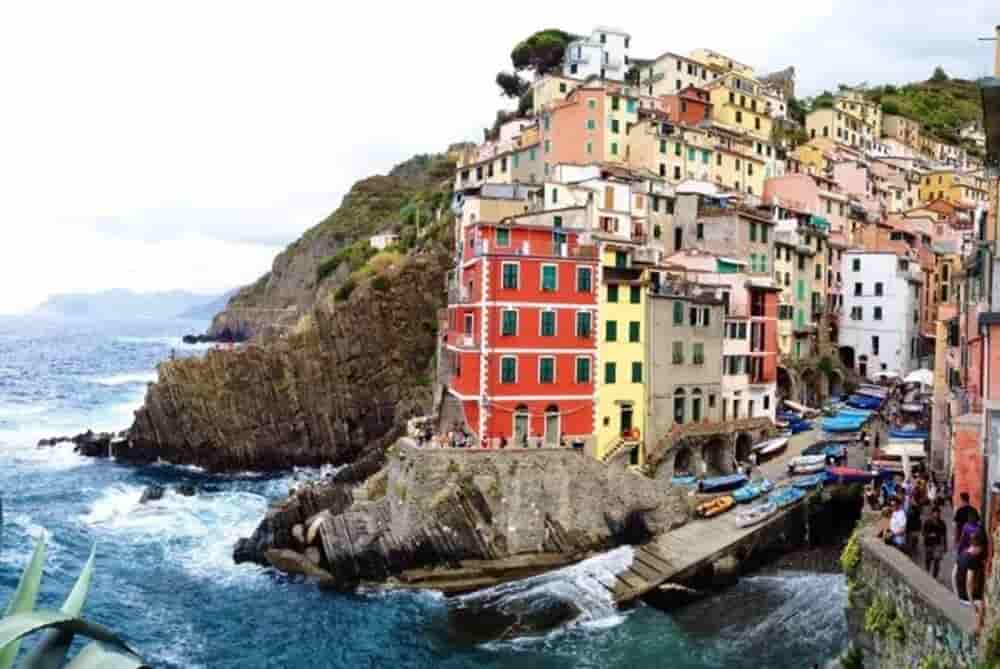 Cinque Terre attracts tourists with its preserved architecture and beautiful trails. The city, where a day trip would not be enough, is known for its seafood. 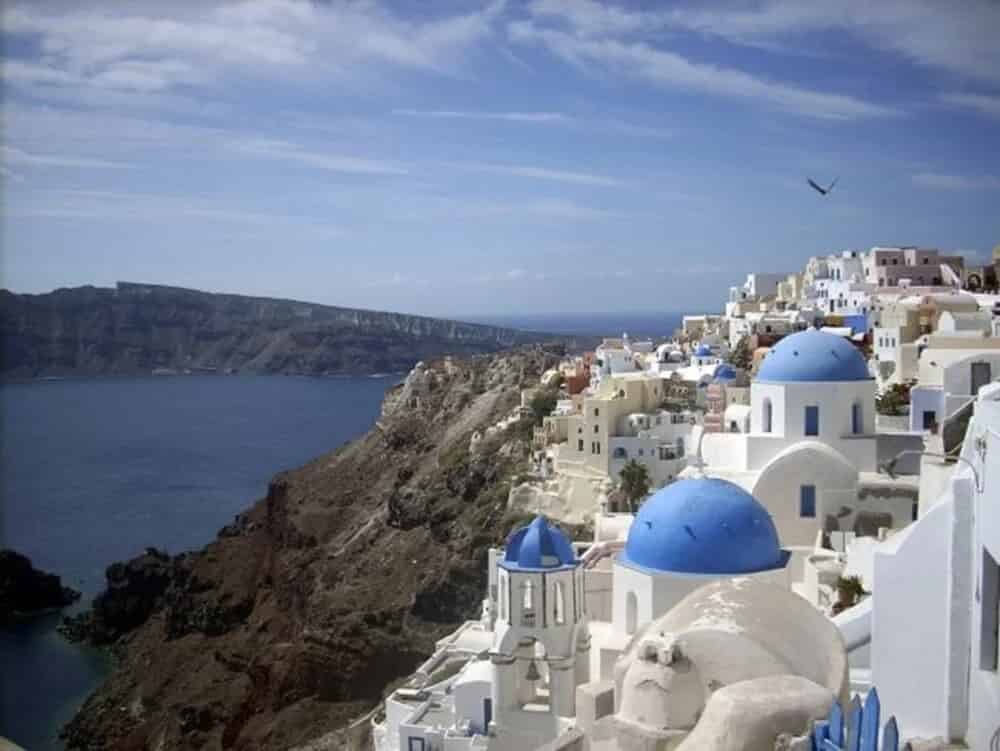 Santorini, one of the most beloved islands of the Aegean, consists of two parts, Fira and Oia. The town of Oia is one of the most famous towns of Santorini with its special atmosphere and natural beauty. Known for its quiet life and sunset views, the village of churches overlooking the sea is in the foreground with its blue roofs. When the whiteness of the buildings meets these blue roofs, a magnificent view is created.

Home to many art galleries, Oia also contains museums from the ruins of the Venetian castle.

3- ‘SAUDARKROKUR’ WITH ITS VOLCANIC FORMATION

Iceland, the island country of the Atlantic Ocean, and the city of Saudarkrokur in the north of the country… Saudarkrokur, the country’s second-largest city, has a population of 2,600. It attracts attention with its volcanic formations and natural beauty.

The center of the town of Saudarkrokur is also very interesting. In particular, the Minjahusid Folk Museum has a small collection of traditional buildings. Blacksmiths, carpenters, watchmakers… They have all been active on the main street of the city since the early 20th century.

8 of the most beautiful autumn routes

The small Norwegian town of Reine, which not many people have heard of, is located in the western part of Lofoten. The city, which is home to about 300 households, is also known as the “fishing village”. Those who come to the town, which is the choice of those who want to camp under the Northern Lights, can stay in old red fishermen’s cottages called rorbu.

If you want to spend your time completely intertwined with nature, choose Reine. Silence, tranquility, oxygen… In Reine, the colors of nature and the city are in harmony.

5- A NATURAL TOWN BETWEEN THE ALPS: WENGEN

Located in central Switzerland, Wengen is a scenic city in the city of Bern. The city, which is 1,274 meters above sea level, attracts attention, especially in winter. In the city, chalets and beautiful natural landscapes create unity. It is also known as the home of the highest train station in Europe. Located between the Alps, the city is closed to traffic. 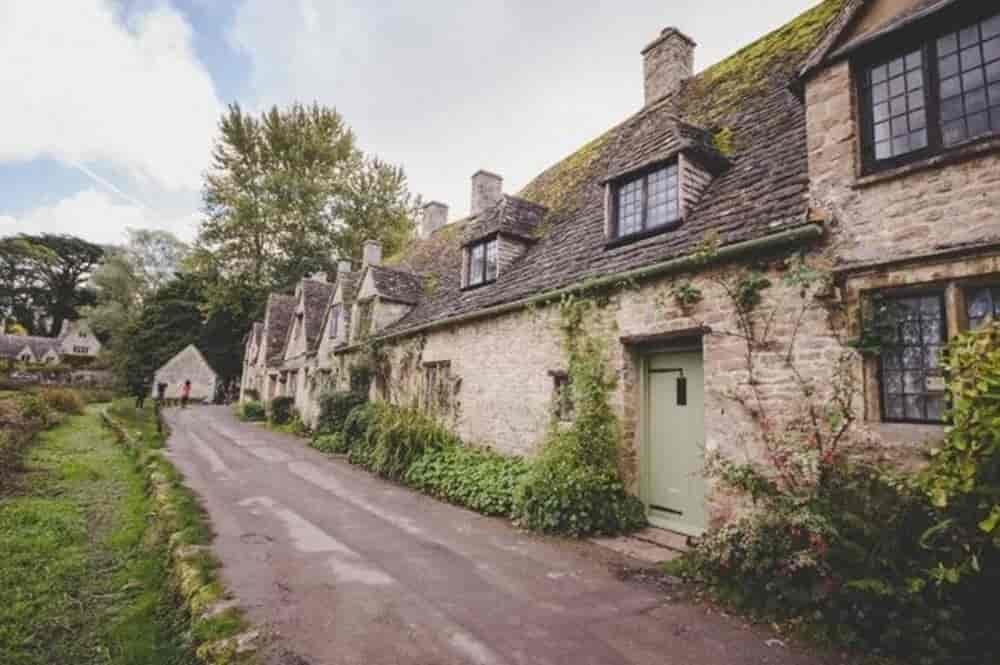 Bibury is a town in Gloucestershire, England. One of the prettiest small towns in Europe, Bibury sits on both banks of the River Coln, a tributary of the River Thames. The quintessential Cotswold town of Bibury was described by the English poet and painter William Morris as “the most beautiful town in England”.

The town’s cottages are the most photographed in the country. The houses called Arlington Row are one of the iconic symbols of the city. 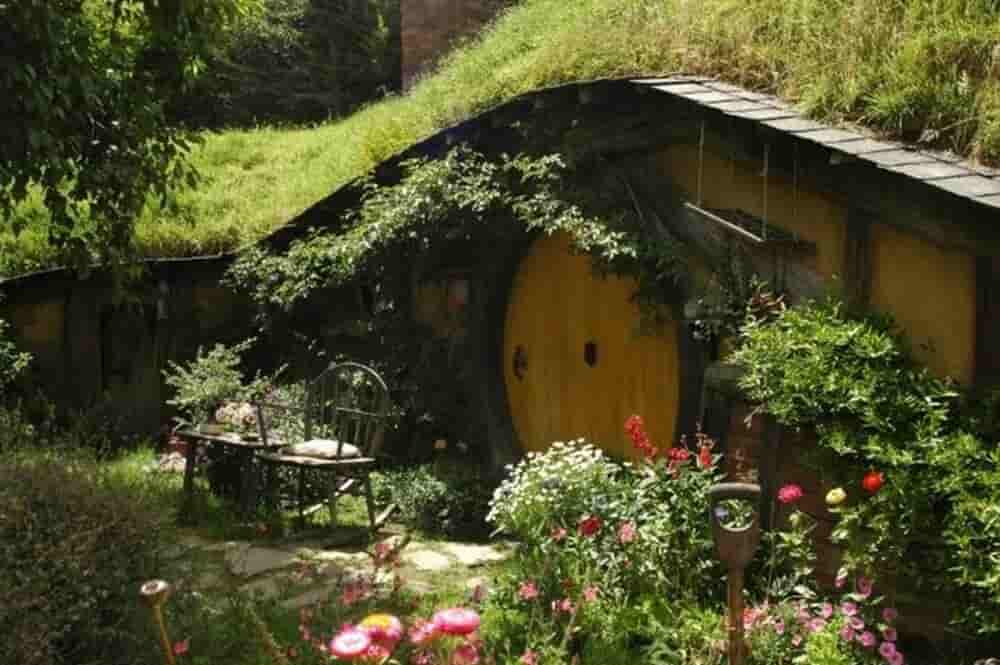 Matamata, which also includes New Zealand’s Hobbiton Village, where the films Lord of the Rings and The Hobbit were filmed, is a town in the valleys. “Welcome to Hobbiton!” at the entrance to the integrated Matamata and Hobbiton Village. including the sign. Known as “The Shire” in the movies, this town has Hobbit cave houses and fairytale cottages.

The town where Bagginsler, who is also a film set, went on an adventure with Gandalf allows visitors to relive the spirit of the film.

8- ‘SIRINCE’ WITH ITS STONE STREETS AND WHITE HOUSES

The cities of the Aegean stand out for their natural structures and warm environments. Şirince, which is located 8 kilometers from İzmir Selçuk, is a city between the mountains.

With its stone streets lined with olive trees and white houses with bay windows, Şirince is an alternative itinerary to the stressful life of the city. Şirince, an ancient Greek settlement, today attracts the attention of local and foreign tourists.

Sidi Bou Said is a town in northern Tunisia overlooking the Mediterranean Sea. Located 20 kilometers from the city center, the city is an escape route for locals and tourists. Panoramic views of the Mediterranean can be observed from Sidi Bou Said, a charming town with its small shops and cobbled sidewalks. At the same time, the city, which stands out with its white houses and blue embroidered doors, is also known as the city of writers and artists. The French painter and musicologist Rodolphe D’erlanger spent a certain period of his life in this city. The Ennejma Ezzahra Palace, built here by D’Erlanger, is the center of the music.

Known for its mineral deposits in Greenland, Narsaq is a farming town in the fjord (steep gulf). There are so many horses in town that the locals describe themselves as “cowboys”. With about 1,500 inhabitants, the city is the youngest city in Greenland, founded in 1959. The rare mineral ore, which is found in very few places in the world, attracts attention with its minerals and rocks.

Safranbolu, a tourist town of Karabük, is located 8 kilometers north of the district center. History BC Hittites, Phrygians, Persians, Romans, Seljuks, and the Ottoman Empire ruled in the city, which dates back 3,000 years.

Safranbolu is intertwined with history and reflects the characteristics of Turkish society from every angle for its visitors. The city is also on the UNESCO World Heritage List. Known for its old Turkish houses, Safranbolu also attracts local and foreign tourists with its natural beauty.

Located in Texas, USA, the town of Marfa became an arts center in 1971 when artist Donald Judd moved to the area. Marfa hosts art festivals every year and is an escape for city dwellers. This city is also a small desert. Home to many art galleries outside of Judd, Marfa’s pristine nature, and cute and tiny houses grab the attention of tourists.

Located in the Asturias region of Spain, Bandujo is also one of the region’s medieval towns. Attracting tourists with its history, nature, and delicious food, a city is a suitable place for all kinds of outdoor activities. Bandujo has one of the most remarkable ecological roads in the country.

14- ‘CUNDA ISLAND’ WITH ITS DELICIOUS FOOD

One of the favorite tourist centers of the North Aegean, the island of Cunda (Alibey) welcomes local and foreign tourists with its ancient Greek houses, cobblestones, churches, papalina fish, Greek and Turkish cuisine with unique flavors, many of which are boutiques hotels.

Taksiyarhis Church, which has been converted into a museum, and Lovers’ Hill are the most visited places on the island.

32 kilometers from Ouarzazate, the capital of Morocco, Ait Ben Haddou is nestled in a valley at the foot of the mountains. The city is located on the old caravan route somewhere between the Sahara and Marrakech. The land of the city, a natural backdrop for Hollywood movies and TV series, glows at sunset. Ait Ben Haddou is a UNESCO World Heritage Site and is also a striking example of Southern Moroccan architecture.

16- ‘CUMALIKIZIK’ WITH ITS NARROW STREETS AND COLORFUL HOUSES

Cumalıkızık is one of the most colorful cities of Bursa. Cumalıkızık, a 700-year-old monumental city, is surrounded by fig and chestnut trees. Cumalıkızık, famous for its houses, is also known for its Ethnographic Museum and Monument Plane Trees. Being the choice of those who want to get away from the city, the city attracts the attention of local and foreign tourists with its clean air, narrow streets, and village cafes.

Alberobello, located in the Puglia region of Italy with its olive trees and the smell of the sea… Famous for its “Trulli” houses made of stones with conical roofs. The city, where history and culture come together, has also been added to the UNESCO World Heritage List with these houses. The lime-painted white symbols on the roofs indicate the status of the family living in it or what religious vision it has.

Famous for its white chalk cliffs towering over the Atlantic Ocean, Etretat is a small town in France. It is also known that the French writer Guy de Maupassant spent his childhood in the city. Known for its old town center and cliffs, the fishing village attracts tourists with its natural beauties.

19- “GOREME” WITH ITS HISTORY WHICH DEPENDS ON THE 4TH CENTURY

Göreme, whose livelihood is tourism, is a town connected to Nevşehir. The ancient names of the city are listed as follows: Matiana, Korama, Maccan, and Hunters. The Göreme Valley and its surroundings, also on the UNESCO World Heritage List, have a magnificent view that has been completely eroded.

The history of the rocks in the city goes back to the 4th century. At the same time, the remains of traditional living spaces in the city are also present.

20- ‘COLMAR’ WITH ITS COLORED HOUSES

Colmar is the third largest city in the Grand Est region of northeastern France. There are some remarkable ruins from past centuries in the town, attracting visitors with the River Thur to the east and the waterways stretching beyond the forest hills. At the same time, the city attracts attention with its colorful houses. With the Colmar War in 1945, the great states of the world fought for the city, which took its present form as the French.